Yet again Hollywood enters remake territory, but this time it's slightly easier to swallow as it's based on the Johnny Depp starring TV series that's over twenty years old, rather than something hurriedly rehashed from a release a few years ago. What's more, director's Phil Lord and Chris Miller are openly mocking the very fabrication of what remakes seem to constitute as these days.

The pairing of sweary funster Jonah Hill, and sappy knucklehead Channing Tatum doesn't appear to be the wisest of collaborations upon first glance, however, credit where it's due -- Hill recently showed he can handle a more serious role in Moneyball; finally deriving from his foul-mouthed Superbad typecast -- their teaming is a stroke of genius. 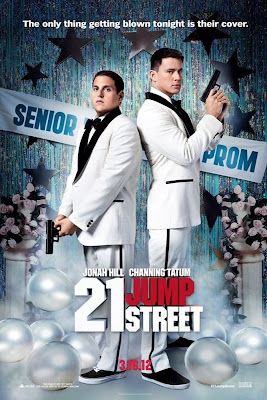 Fortunately, the writers of 21 Jump Street (Hill and Michael 'mixed bag' Bacall) have avoided the genre pitfalls by creating one of the funniest films in recent memory. What's more is that it isn't throwaway like Bridesmaids, or Horrible Bosses.

Bumbling cops Schmidt (Hill) and Jenko (Tatum) are reassigned to work undercover and infiltrate a local high school in order to track down the illusive supplier of a new synthetic drug sweeping through the classrooms. The hapless duo remain inconspicuous and blend in, as hard-ass Captain Dickson (Ice Cube) breathes down their necks for results.

What tends to stick with you -- aside from the consistent hilarity and wit -- are the leads: both Hill and Tatum gel surprisingly well, as the latter transforms into a convincing comedic role with ease. He's arguably the most likeable thing about the movie; could he have indeed found his niche?

From the moment the film begins, it's clear that the script is utterly self aware of itself; dialogue oozes cliché, but remains charming in a self-parodying way. Perhaps it is a little heavy-handed in its approach, but nonetheless must be commended for not taking itself seriously, instead opting to go all out in its self-mocking style.

Character expectancy is flipped on its head, as Schmidt and Jenko embark on a return to high school assuming the set up is the same when they were there; the buff, athletic jock Jenko is quickly exposed as outdated as he struggles to fit in and find acceptance. On the other hand, the bashful and reserved Schmidt is  likeable due to his considerate and sensitive nature. This generational and cultural change is illustrated perfectly when the pair turn up for their first day of school and can't decide whether it's still cool to 'one strap' their rucksacks or not. 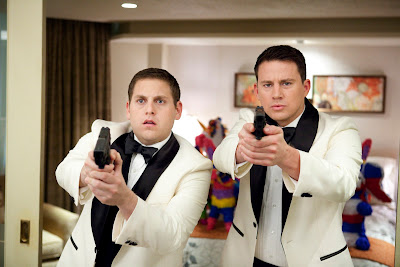 The script is tightly written and has some lovely dialogue that, again, nods at its own tongue-in-cheek attitude, pulling it off to pleasing effect. We're offered a continually fast paced, action packed and very, very funny film that stands out for being far more memorable than any of its recent counterparts. Dave Franco is impressive with a supporting role as eco-friendly, popular teen Eric; as is scene-stealer Rob Riggle as outrageous gym teacher Mr. Walters.

VERDICT: 21 Jump Street is an impressively written, hilariously modern take on the high school comedy. It does a great job of turning conventions on its head whilst being topical and relevant. It's both unsubtle and subtle at times, with a brashness that nails it on every occasion. Side-splitting moments makes this one of the more memorable comedies of recent years.