John Hillcoat's last film, The Road, was a faithfully-adapted, bleak take on the apocalypse, and his latest also falls into the category of novel adaptations; this time courtesy of Matt Bondurant (the grandson of the story's protagonists). 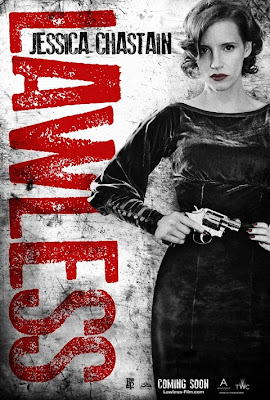 The transfer from novel -- originally titled The Wettest County in the World -- to big screen in the capable hands of Nick Cave (The Assassination of Jesse James; The Proposition) assures a well-paced, intensely authentic depiction of the Bondurant brothers (Tom Hardy, Jason Clarke and Shia LaBeouf, respectively) that proves an interesting if somewhat vague tale of the so-called immortal siblings.

With LaBeouf recently announcing his desire to pursue a career down the indie route, Lawless is appropriate to showcase his talents in an attempt to distance himself from the annoying twerp in Transformers. And it serves him well, because not only does he take centre stage ahead of the up-and-coming Hardy and the blink-and-you'll-miss-it contribution from Gary Oldman, he succeeds in delivering a performance to match the amount of screentime he's given.

Set in rural Virginia during the Depression, the three brothers make a living from their illicit dealings in moonshine, as they enforce a local Bondurant law of fear and violence. That is until a new, unhinged deputy (Guy Pearce) enters the fray. It's perhaps his portrayal that is most memorable, with his shaved eyebrows, centre-parted, slicked hair and (debateably) immaculate sense of style that set him apart. Both Hardy and Jessica Chastain offer subtle, more reserved performances, with the former generating humour with grunty nuances from time to time. 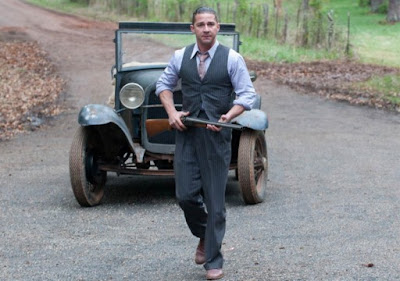 Whilst the acting is consistently strong, the narrative leaves a little more to be desired. As the feud between Bondurants and local law intensifies, there's little incident along the way that significantly builds to its climactic finale. Neither is there a particularly strong presence of sub plotting or subtext,  either, rendering the emotion of the characters somewhat impenetrable. What's more, the vagueness of plot points and lack of exposition prevents the characters from feeling particularly rounded or muster depth and engagement with them.

Even though the story is loose and tends to hone in on the plights of family and responsibility, it has its moments during a lengthy runtime, yet lacks the compelling nature of what it should be due to the overuse of ambiguity. Commendably, Hillcoat's period piece certainly looks the part with an authenticity that makes you wish you were able to experience things firsthand. However, such is the throwaway nature of the beast, Lawless ultimately culminates as a good film rather than a great one.


Inevitable comparisons to Paul Verhoeven’s fantastic original sci-fi epic will be made, and even though it was released twenty two years previously, Len Wiseman has a lot to live up to if he wishes to satisfy existing fans and entice new ones. 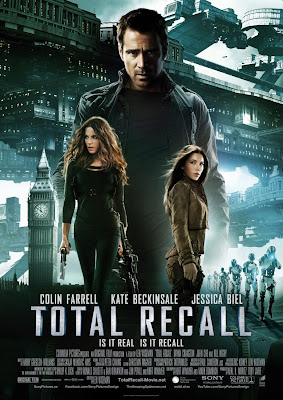 Conceptually, the vision and premise are intriguing: the film begins with slick exposition of how the dystopian, bleak planet functions in the future, and is something audiences can buy into. Visually, it is, at times, noteworthy, but at others is awfully generic: The Colony -- a densely populated section of Earth -- is straight out of Blade Runner; the vehicles and action-orientated vertical chases are similar to Minority Report; whilst the legions of robotic authorities parallel I, Robot or even the clone armies of Star Wars. The result is droplets of imagination, drowned in rivers of creative laziness.

Len Wiseman -- known for his relentless Underworld series -- is simply unable to justify his decision to remake the Philip K Dick story. Rather than utilise the ideas of sci-fi, he simply moulds the existing story into a straightforward chase film, with a climax that possesses little in common with the genre.

In fact, the two hour film is seemingly comprised of four overstretched, adrenaline-fuelled sequences. Glaringly apparent is Wiseman's obliviousness to over-indulgence, the narrative structure scraps any balance of action, exposition and storyline; instead opting for lengthy chase after lengthy chase.

What's more, the little storyline that is included feels like a condescending slap around the chops. Instead of the ambiguity and subtlety the original offered, Wiseman prefers to spoon feed his audience, insulting even the most primitive of minds. For example, a line Hauser (Colin Farrell) has early on -- a seemingly flippant comment about wishing he'd learnt to play the piano -- comes into play when he finds himself in the apartment of the life he has no memory of. We see a piano subtly chopped out of frame (which would have sufficed); followed by a shot of it in full frame; followed by Hauser sitting down and playing, as it reveals its significance in the plot. Surprisingly, we don't hear an echoey, internal monologue along the lines of 'I wish I'd learnt to play the piano' -- because it's that kind of film we're being patronised with. 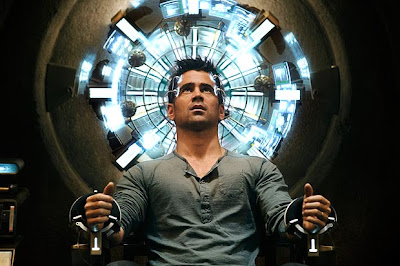 Whilst the set pieces are action-filled and acceptably entertaining, they do -- as mentioned previously -- tend to drag. Regardless of whether director or editor is at fault, the sentimentalism and debauchery is plain to see, which resonates in lengthy, unnecessary segments that shape the entire film.

The wonderful Bryan Cranston is woefully underused as villain Cohaagen, with Farrell and the eye candy combo of Kate Beckinsale/Jessica Biel offering acceptable, if  unimpressive performances. That's not to say it isn't a trio worthy of attention, because the casting are aesthetically pleasing, if nothing else.

Total Recall is a film that thinks it is far cleverer than it actually is. A lack of subtlety, intelligence and ambiguity renders it a story that could take place within any genre, dispelling all appeal of a sci-fi adventure. The trouble is that it takes itself far too seriously, yet insists on including numerous clunky references to Verhoeven's tongue-in-cheek masterpiece, as well as cringeworthy dream puns littered throughout the cheesy dialogue.

All life has been sucked out of the satirically edgy original in favour of a straight-cut attempt at a thriller. However, without reference to its predecessor, it works on the most basic of entertainment levels. In principle it is a needless reimagining of Verhoeven's, and more significantly, Dick's work; serving merely as a modern update for non-savvy audiences in search of a popcorn flick.

N.B. Unsurprisingly, there's a nod to the three-breasted woman, who's not only heavy-handedly plonked into a random scene, but appears to be the only mutant in existence. Odd.