Having turned down the chance of a Knighthood, Danny Boyle maintains his status as the quintessential people's filmmaker. As humble as the man is, there's no denying his features possess a brutal rawness that by and large translates well and whilst his recent feature, Slumdog Millionaire, nabbed an incredible 8 Oscars in 2008, the bar it seems is ever rising. 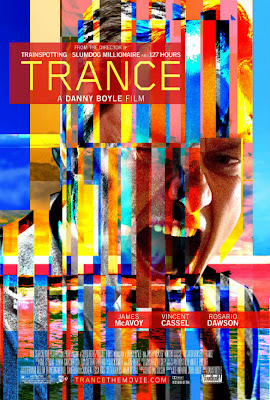 Trance opens with a slick, concise monologue from James McAvoy's Simon that instantly draws you into his world. It's arguably as well conceived as the opening to 1996 smash Trainspotting, as we're hurriedly thrown into the life of an art auctioneer who, for reasons unknown, double crosses local thief, Franck (the wonderful Vincent Cassel), after agreeing to stage a £25m art heist. During the fray, Simon's hit over the head which renders parts of his memory useless -- specifically the part that knows the location of the hidden painting, and thus the story begins.

Aside from plot intricacies and skillfulness in direction, the acting is the driving force here; Rosario Dawson, assuming the role of hypnotherapist Elizabeth, is perhaps the most impressive on display. With a central female role that plays both Simon and Franck off against one other with her effortless and manipulative sexuality, a web of intrigue, twists and turns present themselves at regular intervals as the story delves further into a dark underbelly of morality and subconsciousness.

The majority of the story is monumentally gripping and intense as the narrative gradually becomes unhinged and threatens to derail. It's complemented, as always, by a majestic soundtrack that's both eclectic and appropriately surreal, which adds to the ferociousness of how the narrative spirals. Such is the intended nature of the seedy depths Boyle explores, and as boundaries of reality and imagination merge for Simon, the ambiguous disposition of what is actually taking place becomes lost. 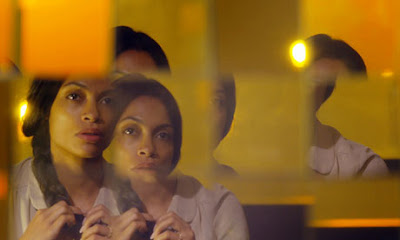 The ride is a glorious and invigorating one that challenges audiences to decipher what's happening with minimal, subtle hints along the way. Its intelligible, non-spoon fed nature is somewhat undone when, during one dialogue-heavy scene, the haziness of events are explained. It is this latter moment where some confusion is finally alleviated, yet we're still none the wiser when attempting to identify the separation of reality from fantasy. This is perhaps both to the beauty and detriment of Trance's conclusion. It's at this point that the script becomes rather convoluted and teeters on losing focus altogether, but doesn't hinder the quality of what's preceded it.

Skittish and exhilarating, Danny Boyle has created a solid British thriller that excels with moments of excellently crafted double bluffs and deception, but will ultimately leave your brain scrambled as you question everything and trust absolutely no one.

Stoker opens with the film’s ending: an oddly juxtaposed shot of Mia Wasikowska’s India strutting across a highway in a pair of heels and into an overgrown layby. We’re not sure what’s going on, but are fed subliminally as director Chan-wook Park intends for us to savour and recall this information and contextualise later on. And that is what audiences are presented with in what is his debut English language film after a string of acclaimed Korean works that include Old Boy and Thirst. 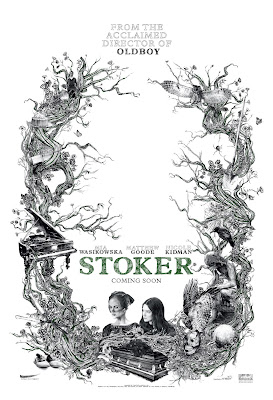 Subtextually, Stoker teases and tantalises with its vampiric parallels that include a murderous blood lust, sexual awakening, generational grooming and incestual behaviour -- the latter being a recurring theme through Park’s filmography, as it is transferred into this seemingly timeless drama with acute detail and to deft effect.

What’s most striking is the visceral direction; structurally, it focuses on a slow-burning story with its off-centre framing and tranquil performances that give the film an overall eerie and unsettling quality. This unease is accentuated by the sublime use of heightened sound that really awakens the aural senses with the crisp dripping of water, for example, that Park uses to overt effect.

Instead of a somewhat forced, clunky transition from ultra violent, extreme Korean cinema into the Hollywood mainstream, a huge degree of integrity and, to an extent, auteurism remains. Park maintains an independent stance in his filmmaking that distances itself from the Hollywood system,  yet at the same time includes known names like Matthew Goode, Mia Wasikowska and, more famously, Nicole Kidman. All three assume subtle, yet captivating roles, as each carefully orchestrated character slots perfectly into this seemingly unspecified setting that could be anywhere from the 1920s to modern day Americana. At one point though, it does define the exact time through a forthcoming exchange between India (Wasikowska) and Charlie (Goode), but manages to feel so effortlessly unspecific by its nature. 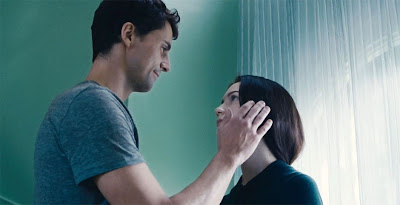 The premise is a creepy enough concept on its own: with the death of her father, India’s repressed, virginal self begins to evolve as her Uncle Charlie appears out the blue to console her and mother Evelyn (Kidman). She represents a sexually repressed, lonely single parent longing for a man’s touch and general companionship. Rather than develop as a narrative powerhouse, the film carefully treads a path of character study and suggestiveness as a result of their actions and choices. In fact, the focal point is on India’s sexual awakening, as Uncle Charlie begins a sensual and seductive objective to unlock her deepest, darkest desires, or indeed exploit Evelyn’s vulnerability as an unloved human merely existing. And it’s these fascinating traits and ambivalency that form the most frictional of threesomes as far as its central protagonists go.

Not a lot goes on plot-wise in Stoker, but what’s significant is the rich subtext and reading between the lines of the beautiful composition, minimalist performances and subtlety of dialogue. It’s unfortunate that this particular approach to storytelling and its hidden depths might turn some viewers off, but this slice of American Gothic disguised as a period piece is not only haunting and engrossing, but wonderfully conceived, too. Start as you mean to go on, Mr. Park.