The day I almost walked out of the cinema

Over many, many years I have excitedly scurried into a cinema full of optimism with a general positive attitude. However, for every 100 satisfying films, there is one that either, by poor judgement, deceptive trailer, or mere ill fate, absolutely stinks. It's bad. Awful to the point of questioning how on earth such an idea was pitched and commissioned, let alone conceived. Some films I have witnessed, and I use that term due to their sheer horrific nature, make me question why I decided to see such a film in the first place. I'm proud to say that as bad as a film is, I have never left mid-experience.

Gamer (2009) is an example I was (un)lucky enough to see on my Birthday last September. Starring Gerard Butler (whom I still have fond, brutal memories of in 300 (2006)) and the talented Michael C. Hall, a cast, which gave me a glimmer of hope that it might be bearable. I was wrong. 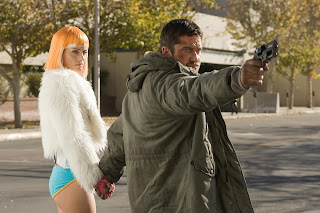 It didn't help that I walked into the theatre a couple of minutes into the film, with the surreal and utterly confusing goings on seeming even more bizarre without a starting point to work from.

So, where to begin? The acting? Story? Characters? Setting? Pacing? Structure? - All truly appalling. Thinking about it now sends a cold, Gerard induced shiver down my spine because it baffles me how genuinely decent actors decide to partake in things that can surely never have seemed like a good idea. Notably Robert De Niro is one whom, after a frankly outstanding career, branched into comedy (why God, why?) and agreed to star in other rubbish, such as Godsend (2004), to name but one.  Gerard hasn't got the decades of quality behind him, so can ill afford to make these mistakes so early.

Surprisingly it was memorable for a bizarre reason. Around a third of the way in the mish mash of colours, weird mise en scene and questionable character actions, made me worry whether my pick ‘n’ mix contained a hallucinogen. It was plain odd, without any relevance and seemed crazy for the sake of it.
The dialogue and 'plot' continued to nose dive into a pit of oblivion and found myself counting down the minutes till I could escape to do, well, absolutely anything else.
The film was epitomised by Hall's dance at the end, which reminded me of Tobey Maguire's embarrassing moves in Spider-Man 3 (2007).

The point I'm making is don't ever watch this. If you are compelled for a bit of Gerard action, then watch 300. You get to see him slaughtering men whilst sporting a magnificent beard.

Occasionally someone will speak fondly of a film you simply never knew existed, naturally sparking a curiosity. No matter how many films you’ve watched, there is always something out there waiting to be discovered. Even rarer, every now and then you hear about this one, amazing film you've never heard of, but simply must see. And yes, sometimes that film turns out to be a brilliant find, a treasure, and all the more sacred because the media haven't sniffed it out and smeared it over every medium possible. 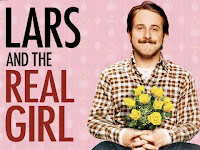 Lars and the Real Girl is one such treasure. So obscure that when I mentioned it in a room of film academics, not one had heard of, let alone seen it, filling me with self indulging superiority.

The narrative follows Lars (Ryan Gosling), a man who finds visiting his brother Gus (Paul Schneider) and wife Karin (Emily Mortimer) a mightily stressful task in itself. His social ineptitude is exacerbated at work with the awkward romantic tension between himself and co-worker Margo (Kelli Garner). Just as it would appear Lars isn’t capable of forging relationships, he finally alleviates solitude by ordering a sex doll; he names Bianca, to become his ‘girlfriend’ as well as love rival to Margo. Naturally, the reaction of the tight nit community is to question his emotional stability, but is the point where the film moves in a refreshing direction. Lars attempts to integrate himself and his unconventional lover into community events anticipating acceptance. Rather than have him thrown in the nearest mental asylum, the locals agree to play along with his delusion (somewhat reminisant of The Truman Show) and treat Bianca as a genuine member of the community. 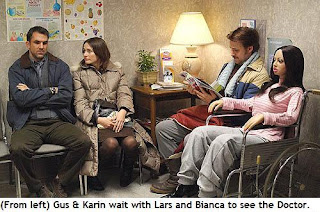 Powerful and emotive at times, the story flows surprisingly well considering the slow pacing in a lengthy film where, to be honest, not a lot actually happens. Lars’ emotional journey is a satisfying one and as things progress, it becomes apparent that the focus is on how Lars understands and comes to terms with his personality disorder. Interestingly the film boldly suggests that the compassion and support of the people surrounding Lars is more effective than any medical solution.

Heart-warming and at times sad, with a contrast of quirky positivity, Lars and the Real Girl is a compelling and thought provoking film. Supported by a cleverly written script and more than adequate performances from Gosling and Mortimer, makes for an entertaining spectacle.