Debutant Carl Tibbetts throws himself into the thick of things with an intense, as well as ambitious film with a stellar cast of Cillian Murphy, Thandie Newton and Jamie Bell. Set in the Scottish Highlands on a secluded island, James (Murphy), and wife, Angie (Newton), seek a getaway in an attempt to save their crumbling marriage. The motives behind such discontent are revealed gradually and heavy-handedly, as the pair separate themselves from the world and, ironically, more so from each other, as the sole inhabitants of an offshore cottage. That is until they spot an unconscious and badly injured soldier, Jack (Bell). Call it good-natured kindness or questionable naivety; they return him to their cottage and offer him aid. And from here on out, this is where the subsequent story takes place with these three characters alone, bar a brief appearance from a mainland local cum holiday home owner. 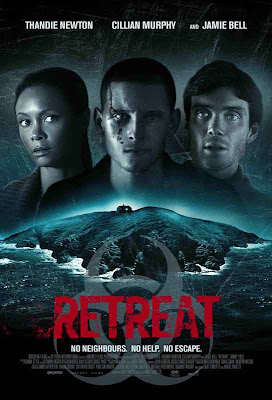 What Retreat tries to do is imitate such isolation themed successes as Phone Booth, Castaway or Cabin Fever, yet doesn’t quite pull it off as smoothly or with the same intensity. Nonetheless, this is a worthwhile attempt - a feature shot exclusively on location, in a mere four weeks - as it uses themes of paranoia, trust and panic within the tight confines of a home. Claustrophobia is the name of the game, as our protagonists’ arcs play out inside the cramped, cold walls as it becomes a very character driven piece and ultimately sinks or swims based on their performances. Assuredly, the acting is of a good standard, notably due to the calibre on offer. However, it is the script that, whilst at times is well executed, is the potential hiccup. Some back-story is too overt in its explanation, and on a few occasions the leads are forced to overact in order to accentuate the weaker scenes. No doubt the ability of said actors is the gelling agent that keeps everything flowing at an amicable pace.

Certainly Tibbets creates tension and has an interesting script/visionary combo that renders the actions of Jack suspicious even to us, as we feel very much in the position of James and Angie who often exert paranoia similar to characters in Straw Dogs or Funny Games. There is a familiar house-arrest, fear-of-God resemblance, which does work well, especially for the played-down finale. Well thought poignancy of the final scene actually gives the film added credibility, as it could have easily adhered to cliché or silly conclusion that could have, and surely would have killed the film in its tracks.

Retreat is a simple story of isolation that proves you don’t need buckets of money to assemble a top quality cast and produce a decent picture. The story and script perhaps wither as times, but overall it's a good first attempt for the Brit writer/director.


The third and most expensive instalment of the series gets yet a new directorial partnership in the form of Catfish makers, Ariel Schulman and Henry Joost. However, a fresh set of eyes doesn't necessarily constitute a more original approach. In fact, the latest offering is perhaps a little too familiar to the tried-and-tested scares the former ones rely on. 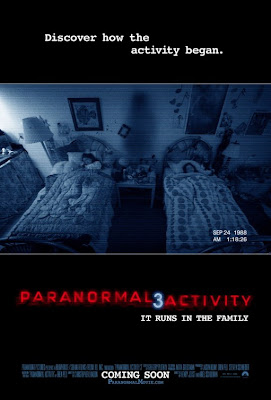 The aesthetic of PA3 isn't just reminiscent of the the first and second: it's exactly the same; a mere extension as the heightened tension and interesting plot exploration looks set to smoothly follow up, albeit it in an earlier timeline. 1988 to be exact, where previously featured sisters Katie and Kristi are young girls growing up with mother, Julie (Lauren Bittner), and boyfriend, Dennis (Christopher Nicholas Smith), whom, in their new home, experience some spooky goings-on to say the least.

Those who have seen the prior titles will instantly feel a home because (positively or negatively, depending on your opinion) it's basically a carbon copy and doesn't offer anything new (whether such a format change would work or indeed will do for [REC]3 remains to be seen). The family set up cameras around the house as we witness the night-time events of said recordings and await the somewhat predictable jumps and slight movements with the clever and low-key special effects.

Assuredly there are a fair few shocks to be had, which are part-and-parcel of the deal when you see a PA flick. Included are some new touches, notably an oscillating camera that brilliantly pans between the living quarters and kitchen area, building the tension for an inevitable terror or subtle entity addition to the surroundings. As far as serving its purpose, we are privy to intimacies of family life coupled with bumps-in-the-night and plenty of psychological terror itself.

Because the story is in the past, we've already been set-up with characters, plot points and details, so PA3 doesn't dwell too much on these aspects, instead opting to use genre conventions to drive proceedings whilst hinting at back-story as underlying frivolity. Such disposition stands out as narratively the weakest picture. An abrupt ending doesn't bode well either, but arguably doesn't require such information because it's already in context in its franchise story arc.

Worthy of mention is the youngest actor, Jessica Tyler Brown, who plays Kristi. She exudes a classic American cuteness and shows promise for the future with her natural ability. By far the most rounded character, she proves very likeable whereas the remainder of the family aren't particularly explored as we never begin to relate to them at any point, thus always rendering distance between the audience and those screaming away on-screen.

Paranormal Activity 3 doesn't tread any new ground and is notably the weakest entry so far. The fresh scare techniques are startlingly effective, only marred by a lack of genuine innovation and overall it doesn't pack in as many terrifying moments as one ultimately hopes for. Nonetheless, a worthy horror to grip and unnerve for 84 minutes.


Based on the BAFTA winning short, Dog Altogether, Tyrannosaur sees British talent, Paddy Considine, assume control of his first feature both behind the camera and in charge of the quill. Starring Peter Mullan and Olivia Colman in a drama that'll shock, grip and emotionally affect you with the authentic nature of its subject matter, audiences are presented with a chillingly real depiction of domestic abuse and anti social behaviour. 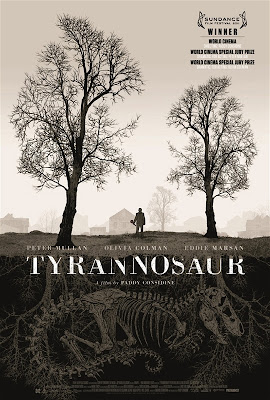 Considine is utterly confident in his debut as he asserts himself with such assurance behind the camera; you’d think he’d been doing it for some years.

The pacing is methodically slow, but works well with the raw imagery and subtly realistic performances that form the illusion of two societal classes (working and middle) clashing, gelling and inevitably merging into one. Colman plays Hannah, the wife of successful, sports-car-driving husband, James (Eddie Marsan), juxtaposed with Mullan’s Joseph, whose roughest-of-the-rough lifestyle is evident. He lives alone, surrounded by the underprivileged, including young Samuel (Sam Bottomley), a character that temporarily eases the depressing nature of life with beyond-his-years charm as well as innocence.

The edit is also slick and direct with pinnacle-moment cut-aways, voyeuristic observations, as Considine is clearly objective and non-sentimental, which serves the end product well.

The script is brutally honest at times, as it maintains tension with the sheer volatility of personalities, most notably Mullan, who recklessly explodes mainly because there are no repercussions for him. There's no one in his life to question such actions, until Hannah that is. What's worth noting is that it took a mere seven days to write the 90 minute film, albeit it with the aid of an existing premise, context, characters and cast, which translates into a fascinating commentary on human behaviour, restraint and subserviency; you’ll notice a parallel within each character’s life, with constant shifts from disdain to empathy. The real beauty of the piece as it displays the talent of the director/writer, and how tonally he construes the idea to the big screen effectively. Joseph, who is essentially the film’s protagonist that suggests redemptive undertones, accentuates this perfectly with his obnoxious and frankly disgusting behaviour, yet at points it is hard not to support him in his plight. 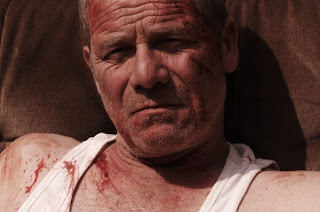 Performance-wise, Mullan more than convinces as a dishevelled, well-worn man who's living an unfulfilled existence since the death of his wife. A close-up shot of his face resembles the dry, wrinkly scales of said film title, yet isn’t what it refers to. In fact, the title can be likened to several intrinsic elements, and is only explicitly referenced at one point.

The driving force and heart of the script is the stand-out offering from Olivia Colman. For someone very much typecast to comedy, especially British TV series Peep Show, she displays remarkable resilience to avoid falling into her familiar role, instead delivering an opposite-end-of-the-spectrum performance, with a completely contrasting character that has no remnants of the bubbly Sophie. Certain for BAFTA, if not Oscar nods, Tyrannosaur is a break-through film that introduces Colman as a genuine, serious talent and merely confirms Mullan's already fantastic ability, too.

Tyrannosaur is gut-wrenching, both as a result of its violent and emotional outbursts we bear witness to. An underlying notion of danger and trepidation generates some unbelievably intense moments, which is strangely complemented by tender embrace. The acting is intensely flawless and unforgiving, as Considine deserves praise for an engaging, compelling and superbly crafted first attempt.


Since its release almost two decades ago, Disney's renaissance period of the 90's is perhaps typified by the release of The Lion King. Whether you've seen it or not, the characters and the songs are universally recognisable. From Simba to Mufasa, The Circle of Life to the infectiously likable Hakuna Matata, it's hard to deny this is one of the studio's greatest achievements to date. Such quality is accentuated by its global success and remains the highest grossing, hand-drawn animated feature in history with almost $800m in box office takings. 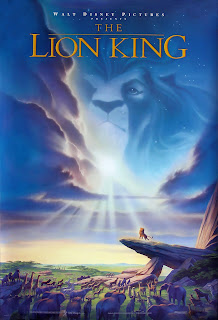 In a classic story structure inspired by Shakespeare's Hamlet, as well as the age-old biblical poem, Epic of Sundiata, Simba (Jonathan Taylor Thomas), is forced by evil Uncle, Scar (Jeremy Irons), to flee after the death of his father, and King to the pride lands, Mufasa (James Earl Jones). It excels with it's simple, yet hugely engaging narrative and storytelling devices. An all-star cast is standard for Disney, and this is no exception, with lead voices from Matthew Broderick, Rowan Atkinson, Nathan Lane and Whoopi Goldberg.

Aside from the superb soundtrack and score courtesy of legendary duo Elton John and Tim Rice, every other department delivers, thus making Disney's 32nd film a truly timeless classic. Whether it's the perfectly choreographed introductory sequence to Pride Rock, or the tension of the elephant graveyard chase or even a touching long-lost flirtatious reunion; The Lion King uses its 89 minutes to pack in essential content, rather than surmountable filler.

The notable adaptation is a remastering of the original theatrical cut, only this time with the addition of 3D (gasp). As per the saturation of the format, scepticism naturally surrounds the suffixed title. However, what makes this release an improvement upon the original is the meticulous way in which the third dimension is incorporated; the painstaking efforts to assure such a conversion stands out from other such titles is its dedication to use it to its true potential. Not since Avatar has the format been used so effectively, with an open invitation to immerse audiences into the story even more so than the first time around.

A classic in every sense of the word with no apparent flaws that stand out, not even the 3D element can hinder the wonderful experience on offer, which is a huge bonus considering the sloppy use of the format elsewhere. Iconic in its nature, Disney have updated one of their best titles, as The Lion King becomes accessible to a new generation of cinema goers, yet to those familiar with the movie it feels just as special as it did almost twenty years ago.