Blade Runner. Minority Report. Total Recall. Any of these ring a bell? Perhaps they do. Perhaps you are in the know and recognise the origins of these classic stories as the genius work of Philip K. Dick. A pioneer in science fiction, he dedicated his entire life to exploring and publishing works on the genre and I for one am thankful for it. 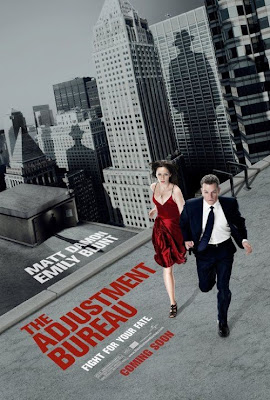 The Adjustment Bureau is the latest efforts of his to be adapted into a Hollywood film. Starring Matt  Damon and Emily Blunt, it is a tweaked version of his short story titled  Adjustment Team written in 1954, with director/writer George Nolfi (writer; The Bourne Ultimatum) making alterations from the original by changing names, events and narrative, yet the deviation plunges his project into the 'unknown quantity' category, but claims to maintain the quintessential elements of the premise.

Politician David Norris (Matt Damon) is running for Congress when a chance meeting with Elise Sellas (Emily Blunt) in a restroom sparks an instant love affair. However, a secret organisation known as the Adjustment Bureau, a team of all seeing, all knowing men who adjust humanity's fate, deem that the pair are not 'scheduled' to meet again in their lives. But when they cross paths after a blunder from Norris's minder Harry, (Anthony Mackie) whom fails to adjust his fate, higher figures within the Bureau are forced to step in and prevent the pair from ever finding one another, as doing so will alter their fates for the worse.

It's worth noting that Damon and Blunt initially do a convincing job of creating chemistry and set up interesting characters and, thanks to the screenplay, an intriguing story worth exploring. Nolfi's clearly put his all into the project, yet something about the character development, plot and overall progression is lacking.

It's clear the material presented to Damon and Blunt restricted them in terms of showing off their acting palette. The characters they portray are one dimensional, which is somewhat disappointing after the glimpse of their potential during their first on screen encounter. Admittedly being a bigger follower of Damon than Blunt, it felt like a step back in his career after such prominent roles as Jason Bourne (Bourne Trilogy) and Detective Sullivan (The Departed) to emerge with, at times, a bland and 'mushy' performance that failed to live up to the misinformed claim that the film was 'Bourne meets Inception'. The Adjustment Bureau is neither of these. In fact the amount of action and thrilling elements are severely lacking amongst a preachy, slow moving story about the powers that control life and indeed the planet's destiny. A little too spiritual in places, being somewhat of an atheist, I was left feeling alienated and frankly unconvinced by it's uninspiring plot.

What initially raised expectations were certain aspects regarding the trailer which, whilst it wasn't amazing, pulled me into the world where mysterious men in overcoats control the fates and lives of everyone. Yet even the trailer had problems fizzling out into a weak conclusion, which ultimately reflected in the finished product. 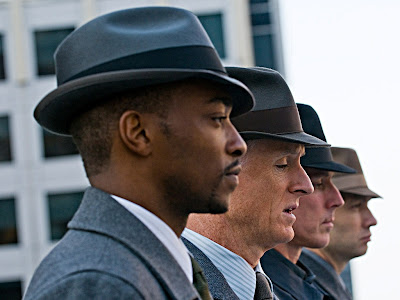 It's important to address some key issues to demonstrate the film's  problems which include inconsistency and questionable logic. The Adjustment Team affirm themselves as an all mighty power over the world. The team are  lead by Richardson (Mad Men's John Slattery) gives the impression that him and his trilby wearing men could do anything, be anywhere, similar to The Matrix's Agent Smith. But as the narrative progresses, we quickly learn that these so-called 'rulers of fate' are no more than sloppy, bumbling fools, thus undermining what they stand for.

Therefore, with no clear threat or fear factor from the Bureau, it makes it difficult to evoke any real concern for our protagonists and fails to create genuine tension within the story. More worrying is the thin and poorly directed plot which, after the characters are established, struggles to build momentum or muster any constructive progression.

Support from Michael Kelly as Norris's political advisor, Charlie, is under used and as the build up to the film's climax is played out, he is nowhere to be seen as the focus becomes solely on David and Elise and their seemingly hopeless attempt to be together, which involves a lot of running and pushing people out of the way. 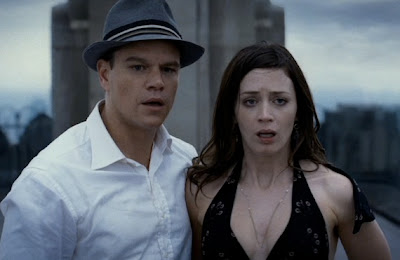 Towards the latter stages of the film it feels like it doesn't really know where the story is heading, as a conclusion doesn't render logical or conceivably consistent with the premise. As it turns out the climax was bitterly underwhelming as well as ambiguous, and not in a positive way. The result leaves me confused and pondering what exactly it was I witnessed for the 100 or so minutes. Saying that, it  wasn't all a complete wreck. The acting shone with glimmers of quality but the pacing, or lack thereof, left me bored with little plot twist or development.

The original idea from Dick was interesting, as is its concept, yet Nolfi's alterations appear to have stalled what great potential it had. Sadly the story is weak and uninteresting, coupled by a lack of pace and direction required for its genre. Topped off by a lacklustre climax, The Adjustment Bureau becomes a sluggish chore to watch for most parts, while the point of the whole thing remains ambiguously unresolved to say the least, which left me questioning why I even cared in the first place. Compared to Dick's other adaptations, this falls way short of the quality of the aforementioned Blade Runner or Minority Report, which were well executed, superbly directed, atmospheric sci-fi thrillers. The Adjustment Bureau sadly isn't.

If you're not familiar with 2009's surprise indie hit Moon, then now is the time to educate yourself. Newcomer Duncan Jones directs Sam Rockwell through an interesting and dramatic sci fi unlike no other. Jones (formerly Zowie Bowie and son of David) creates a simple, yet high concept flick, which barely scrapped the surface of the mainstream, yet was a massive hit with critics.

Jones's follow up remains in the realms of science fiction with soon to be released Source Code starring Jake Gyllenhaal and Michelle Monaghan. The trailer is  reminiscent of 2008's Vantage Point which has elements of repeating the same scenario (in this case Gyllenhaal can keep reliving the last 8 minutes of someone's life) but hopefully a much better attempt, more along the quality of Groundhog Day one hopes.

Supported by a strong cast including Vera Farmiga and Jeffrey Wright, Source Code promises to be a much  faster, more thrilling film than Jones's debut, whilst retaining his quality and attention to character development that made Moon so memorable.

Check out the trailers here...

It was an interesting Oscars 2011. With all the hype at the end of last year surrounding The Social Network, it was the selection of great films that emerged early this year that spoilt David Fincher's preemptive victory. It's no secret that The King's Speech got the most attention and the Oscar buzz, which then became poised to snap up most of the awards it was nominated for. 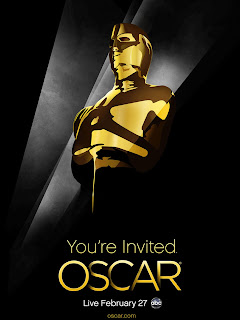 The aforementioned title was predominantly praised for the performance of Colin Firth, who (some say) rightly went on to win Best Actor, and whilst I agree his performance was excellent, it wasn't one of the most memorable roles, and for me, doesn't sit alongside the greats.
So whilst The King's Speech went on to win four Oscars (Actor, Picture, Director, Original Screenplay), conflicting opinion would suggest there were more worthy winners.
I'll give Firth some acclaim for his role as King George, even though there were other brilliant performances from the likes of Jeff Bridges and James Franco, but lets be honest, Bridges was never going to win the award two years running, it's just how it works. Having seen most of the Best Picture nominees, personal judgement would suggest True Grit, Inception and Toy Story 3 were far better. However, it's not uncommon for the winner of Best Picture and Actor to triumph hand in hand, so no major surprise there.

The big upset for me was that it scooped Best Original Screenplay. I'm in admittance that the writing was excellent, but correct me if I'm wrong, isn't the idea of an original film surely based on an originally conceived idea and not on a true story? For me Inception was far more deserving of winning that award because, simply put, Chris Nolan is a genius. His script is fascinating and one that is completely generated from an original, never before seen idea.
The directing, in both style and substance, didn't really convince me that The King's Speech should win the gong for that acclaim, yet Tom Hooper prevailed. I found Darren Aronofsky's Black Swan to be a far more accomplished and interesting portrayal of his characters, thus a stronger candidate for the Oscar.

Now my The King's Speech rant is over, lets talk about the other big winners. It was a shame that Toy Story 3 was an 'also ran' for Best Picture, mainly because the opposition was so damn strong, but was none the less a truly superb film. Thankfully, as predicted, Pixar claimed Best Animation and rightly so. Toy Story 3 is simply a classic film and a near flawless end to a fantastic trilogy. 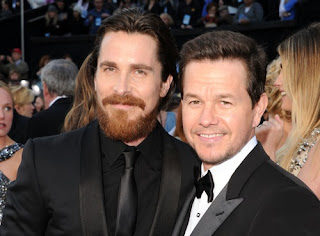 The surprise for me was Christian Bale walking away with Best Supporting Actor. I do love Bale and find his acting outstanding for roles in The Machinist, Breaking Dawn and of course; Batman. After seeing The Fighter I was left feeling that he may indeed beat Geoffrey Rush, but still decided to back Rush as I really enjoyed his performance (far more than Firth's). However, I was proved wrong and pleasantly surprised with Bale's win.

Natalie Portman's victory was the most unsurprising of the night. Even though she was challenged by other excellent performances from the likes of Amy Adam (The Fighter), Michelle Williams (Blue Valentine) and Nicole Kidman (Rabbit Hole), Portman was always firm odds on to win. Melissa Leo joined Christian Bale in a successful night winning Best Female Support for The Fighter. Granted her acceptance speech wan't the most dignified, her acting, on the other hand, did impress. Again,I found her performance very strong and spot on, but felt newcomer Hailee Steinfeld was by far the stand out nominee for her role in the Coen's True Grit, which failed to make any real impact on the night. But I don't care, their film was still ridiculously awesome.
Whilst on the thread of True Grit, it was very disappointing for Roger Deakins to miss out on Best Cinematography yet again. What does this man have to do to get the acclaim he deserves?! Instead Inception won, which was still pleasing as it was probably my favorite film of 2010 (with Toy Story 3 a close second).

The less prestigious awards (that are no less deserving in admiration) presented expected outcomes, with Alice In Wonderland winning Costume and Art Direction. Brit nominees Ian Barnes and Samantha Waite missed out on Best Short Film with their efforts for Wish 143, but it was great to see them considered for an Oscar. The one thing that confused me was the Foreign Language Film outcome, which saw Javier Bardem starring in Biutiful, which was surely set to win as it was in the mix for overall Best Picture. Yet it was pipped to the post by In A Better World, which I found strange as Biutiful was competing with the likes of The King's Speech and Black Swan, yet failed to win in it's own sub category.

There were some cool photos from the ceremony, plenty of well dressed stars too and, as is custom, a selection of bad ones. Christian Bale sported a big ginger beard, and a heavily pregnant Natalie Portman looked lovely. But the photo that impressed me most was the one below capturing Jeremy Renner's 'glance' at Scarlett Johansson. I wonder what he was thinking...? 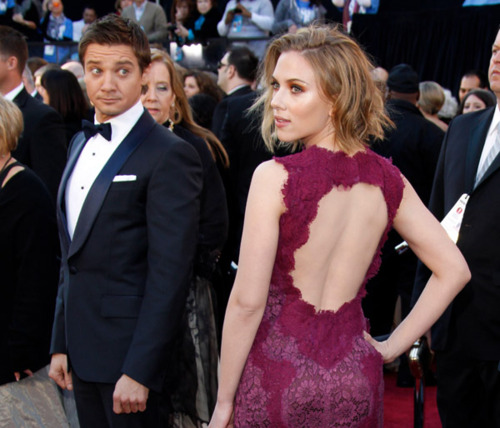