When I first got wind of a potential third instalment of the Toy Story series, I was somewhat sceptical, not only because sequels are rarely of a high quality, but learning the terrifying news that the third film would be solely made by Disney (with numerous poor cash in follow ups in recent years), with Pixar (the genius behind the first two as well as WALL-E and Up) remaining out of the picture entirely .

Fortunately my scepticism was dispelled on both accounts. Not only are John Lasseter and the legendary Pixar team behind it, but the entire original voice cast are back to conclude a near prefect trilogy. 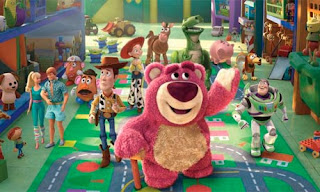 Toy Story 3 plays out similarly to the second, but in places, is clearly the darkest of the three. Bar a few original characters, everyone including Woody, Buzz, Hamm, Rex and Slinky are back, as well as several new and frankly brilliant additions, which include a Fisher Price phone, a disgruntled clown and a sinister strawberry scented bear (it'll make sense), which fit effortlessly into the Toy Story world, without stealing focus from the main characters.

The theme of the final instalment is one of moving on, with the toys realising their time with owner Andy is over. However, their purpose is reiterated by Woody throughout; to always be there for Andy, even if they are dumped in the attic. 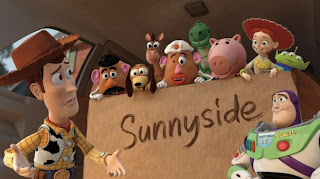 Unsurprisingly things don't go to plan. Woody and the gang end up at Sunnyside, a day care centre where they will never be disgarded or outgrown, as Andy is now leaving for College. At this point I began to question the film's direction and intent. I quickly learnt how naive I was to assume such things, as the story took off, it became mightily entertaining, made me laugh out loud and genuinely thrilled me at times. Cue the set up for a prison break style movie, which pays hommage to some classic movie moments, one finely executed sequence parodying Oceans Eleven.


As well as iconic film references, several jokes from the previous two pop up without feeling overdone or stale, finding a subtle, perfect balance, as seems the trend here.
Granted it isn't perfect, but then nothing is. A short spell midway through did feel a tad slow, as did a segment at the end, but all is forgiven as such a pacing was necessary to conclude the series.

The charm is there in buckets, with the appealing nature to both adults and children alike, as Pixar have demonstrated so well over the years. Genuinely fresh and funny as the story progresses, one of the high points being when Mr Potato Head temporarily replaces his body with a sandwich related food (no spoiler intended!) and a symbol crashing, (literally) eye popping, deranged monkey (it'll make sense upon viewing), makes Toy Story 3 a conclusion worthy to be mentioned alongside the first two.

Not as ground breaking or original (obviously) as the first Toy Story or even their films of recent years, it can, however, stand proudly beside them. Toy Story 3 delivers on every level and the 3D makes it even sweeter.

For me, the name Sam Rockwell has been synonymous with undeserved, minor roles in notable films such as The Assassination of Jesse James and a slightly larger part in Ridley Scott's Matchstick Men. 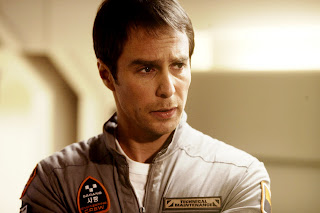 His most recent starring role is last years small budgeted, widely unknown Moon. Directed by Brit débutante Duncan Jones (son of legend David Bowie), Moon follows the isolated tale of Sam, whom, in the future where Helium-3 is harvested on the Moon to aid Earth in its energy crisis, he is the sole employee on a lunar space station to oversee the mining of said resource. Paying homage to 1968's 2001: A Space Odyssey, Sam's only company is a computer AI by the name of GERTY (voiced by Kevin Spacey) whom assists his daily life.

The film is refreshing and derives from anything remotely mainstream, with Rockwell's strong performance carrying the simple narrative well. Essentially categorised as science fiction, which, after a particular plot revelation becomes more apparent early on, Moon tends to focus on a personal journey in regards to Sam's lonely existence and longing to be with him family back on Earth. A couple of twists aside, the narrative progresses slowly, but maintains interest even though it is far from a thrill a minute.

As straight forward as the plot appears, there is a compelling quality that is hard to identify. Maybe it's a combination of fine acting and use of a good script without the need for special effects, that you rarely see in modern sci-fi. 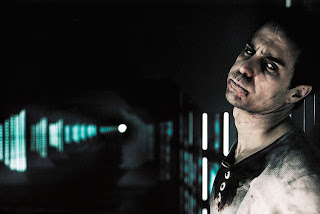 The character-driven script is, as mentioned,  excellently acted and is gripping at times. Moon delivers on many levels, it's gritty and dark, yet amusing, as well as heartfelt; evoking a genuine sense of concern towards the protagonist, which can be identified as arguably it's strongest aspect.

Considering it's essentially a one man cast and with a low budget, Moon offers something different in terms of a science fiction movie. It focuses more on the gruelling and, at times, desperate existence of Sam rather than the technological impacts of the future, which again, offers something a little different to audiences who are used to the same sci-fi ideas regurgitated over and over.

Admittedly, patience and an open mind is required here, but at a mere 97 minutes, the rewards are most certainly worthwhile.
★★★★
Sources: Internet Movie DataBase
Photos: Google Images