A spur of the moment competition here at The Littlest Picture Show, The Hut have kindly given a copy of the new British movie Wild Bill (released just last week) to be won. You can check out my cinema review here.

ALTERNATIVELY,  if you're not on Twitter, then simply leave a comment below with your name and email address.

Seth MacFarlane's first venture into mainstream cinema was always to be an anticipated affair, especially if you're partial to his long-standing shows Family Guy and American Dad! 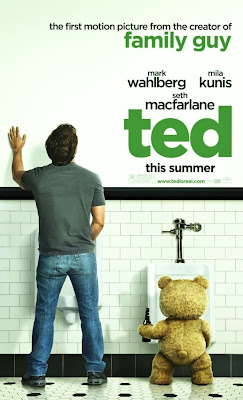 Creator MacFarlane assumes control over director and writer duties for a movie that is about a talking teddy bear. The premise focuses on John (Mark Wahlberg) who, as a child, wishes for his new stuffed toy -- a bear he aptly names Teddy -- to come to life, which it subsequently does. The fact that Ted is the only walking, talking bear of his kind is irrelevant (kind of), as girlfriend Lori's (Mila Kunis) acceptance of the unique situation and bond appears to wear thin.

It all begins promisingly with the sultry narration from Patrick Stewart as the first couple of scenes play out nicely. Seth MacFarlane's desire to break into Hollywood after small screen success is clear, but his venture may have worked better had he persisted with the shockingly offensive nature of Family Guy rather than catering more towards the Superbad demographic. Not necessarily a bad move, the style of Ted is overtly mainstream, as many of the jokes within it accommodate for this audience. But what's ill-fitting is how this essentially adult comedy with a potty-mouthed child's toy is set within a fairytale-style narrative. It makes for a bizarre combination, as the anti-Semitic jokes fail to gel with the more tender moments -- and, believe it or not, there are a few.

Whilst the CGI character looks rather convincing at times, the gratuitous profanity quickly becomes stale. Therefore, those who prefer a more intelligible rather than gross-out, sweary form of comedy will find large chunks of the film laborious. 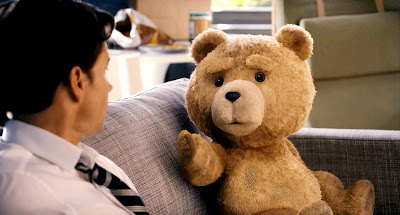 That said, there does come a point where it manages to create poignancy, and the story -- albeit as far-fetched as it is -- does deliver on a basic, engaging level.

There are a couple of cameos; mainly appearances from Family Guy regulars Alex Borstein and Patrick Warburton, as well as a few other well known faces that generate genuine laughs, but the overall quality of comedy is far too inconsistent.

Ted is obvious mainstream fodder, as MacFarlane sways from more obscure cultural references to ones about Twitter and Taylor Lautner. The gags throughout are very hit-and-miss: when they work -- and they do at their most edgy and controversial -- they're hilarious, but at other times the set-ups and 'safe comedy' simply fails to impress.

Chris Nolan's third instalment of the successful and much loved Batman reboot is finally unveiled, with the pressure of surpassing the billion-dollar-earning, Oscar-winning sequel The Dark Knight, can The Dark Knight Rises live up to its ridiculously high expectations? 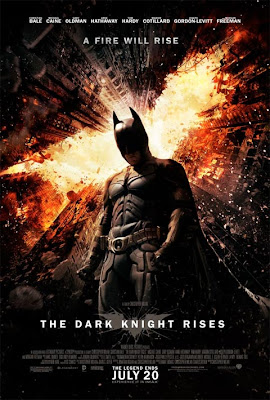 To begin with, it's worth declaring that Rises is a breathtaking spectacle on a sublime scale; more so than Batman Begins, and on par with The Dark Knight.

We're thrust eight years into the future, and therefore the film takes a little time to re-establish itself, but does so satisfyingly within the opening half hour. The script incorporates snippets of relevant exposition in order to burst into the film's second and third acts with great momentum, allowing the events that take place thereafter to have the most impact possible due to the existing investment in the characters.

Christian Bale thrives as he does in previous entries, mixing billionaire recluse Bruce Wayne with masked vigilante well. Michael Caine's Alfred has meatier segments of dialogue early on, which certainly allow Caine to showcase his ability more than before. However, it's Anne Hathaway's portrayal of Selina Kyle that really impresses, as she threatens to steal the film all by herself. Tom Hardy's Bane is effective and as accomplished as his brutish character can be, but is unable to offer the dexterity of Heath Ledger's Joker.

Whilst the narrative and early structure isn't as polished as The Dark Knight, the set pieces and action sequences are just as mind-blowing. What's more, the screentime Batman and Bane share is just as riveting as the ones with Joker in the previous entry.

Various moments present a poignancy that's largely devoid in the other movies, and achieves the balance of emotion just right, especially where key characters are concerned. Things aren't hampered by the tremendous score courtesy of Hans Zimmer, either, and adds to the grandiose magnitude of events.

The Dark Knight Rises is a truly epic conclusion to Nolan's breathtaking trilogy. Apart from a slightly slow beginning, the majority is pacey, slick, thrilling and utterly spectacular. Anne Hathaway surprisingly stamps her authority, as Bale et al remain as watchable as ever. If there's one film to see this year, it's this.

Review: Being Elmo: A Puppeteer's Journey

For some, The Muppets will be forever cherished. Timeless is their appealing nature, the latest feature length, self-titled movie merely proves the insurmountable, continuous love the globe over.

This concise, yet utterly poignant documentary touches upon the story of Kevin Clash -- the man that brings the child-like voice of Elmo to life every day. Seeing him as a youngster will galvanise -- for his first puppet he resorted to taking existing in-use materials from around his home in order to craft a Henson-style muppet -- because his story comes across as a uplifting tale of achieving one's dream, but the real emotional grab of the film is how Clash uses his fame and influence to bring sheer joy to others. 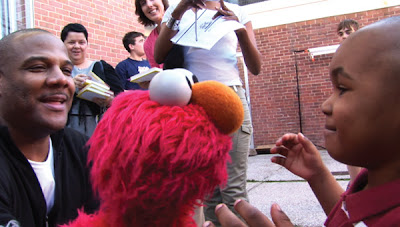 Touring the famous muppet workshop is truly an eye-opening experience, as we gain a glimpse of the day-to-day goings on of both puppeteers and crafters. Clash spends a large segment of the doc showing us how much comfort Elmo can bring to children, too (ones he specifically meets are often terminally ill), with a consistent subtextual message of togetherness and making the most out of life. Not only that, but Clash remains grounded and utterly genuine as he offers a helping hand to other wannabe puppeteers yearning for the big break he so graciously received himself.

Being Elmo is a taut and wonderful insight into the world of The Muppets. It's a brief, but very inspiring documentary that is well worth seeing, not only as a suitable alternative to blockbuster fodder, but simply as a pleasingly quaint and moving documentary.

Not unusual nowadays is the repackaging and re-branding of film franchises that are barely older than one's underwear in an attempt to offer a fresher, more modern and even better alternative to what we've seen in the past. The Girl with the Dragon Tattoo is a prime example of said quick turn over with a mere two years between Swedish original and Fincher remake. 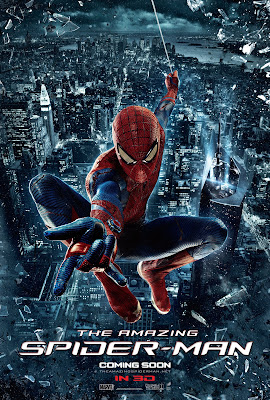 Relative newcomer Marc Webb (500 Days of Summer) takes on the inaugural task of rebooting Marvel's Spider-Man franchise a decade after Tobey Maguire donned the latex in what culminated in a surprisingly well-received genre flick followed by an even better sequel.

Familiarity aside, the main differences are the new cast. Andrew Garfield assumes the role of teen misfit Peter Parker, who offers a likeable portrayal of the young hero with not only a superior acting pedigree, but a more fitting stature, too. Emma Stone replaces the po-faced Kirsten Dunst, and instead fills the role of Gwen Stacey rather than Mary-Jane -- a character that emerged long before MJ as an original love interest for Parker.

The script is well formulated, which includes a sparse but worthwhile amount of laughs -- the most memorable being Spidey's reaction to a car thief as he falls to his knees exclaiming, "You found my weakness, it's small knives!" However, as much as a reboot may sound fresh, it actually treads very similar ground to the Sam Raimi films: sure, it has to remain faithful to the comics and as an origin story, but there's virtually no inventiveness or originality to Webb's interpretation aside from a non-organic web shooter; instead, one that is attached as a wrist-sized mechanisms. In fact, it treads the steps of Raimi's 2002 original a little too closely (apart from a different villain and heroine), with rehashed scenes displaying Parker's stance against the high school bully for example, albeit achieved in a slightly different way. 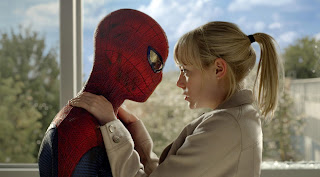 A strong focal point is the relationship between Parker and Gwen, whose unfamiliarly with one another quickly develops into an awkward acquaintance before blossoming into something more. This element is perhaps the strongest aspect Webb conveys, as the pair bashfully interact in high school hallways, and what's more is that they convince with their chemistry. The balance of comic book origin tale to high school love story sways largely towards the latter, as a bigger portion of the movie follows their developing romance, detracting from Rhys Ifan's Dr. Connors/The Lizard until the final half hour.

Whilst Webb succeeds with the romantic plot, it would appear the villain of the piece is forgotten about, and when he does begin to feature the lacklustre CGI and pristine lab set-up amongst the faeces of the sewers merely assert it as whimsical rather than threatening. Furthermore, one gets the feeling the director's lack of experience is exposed as the comic book essence is there, but loses its way in the middle. 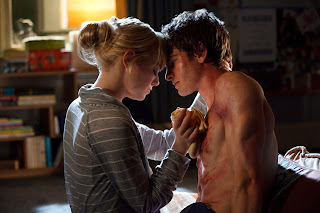 The subtext is as obvious as Stone's attempt to blend in wearing those arousing knee-length socks, with the film progressing at a safe pace and cautious tone, afraid to delve into darker territory as per Nolan's Batman series. Its messages are a little heavy handed in places -- glaringly so amidst a poignant scene involving the wonderful Martin Sheen as Uncle Ben.

A noticeable disappointment is the amount of exposition that never quite delivers. A promising start indulges in some mystery and intrigue into Parker's earlier life and the relevance of his parents involvement in the film. We're privy to some backstory, but as soon as a snippet of info is extracted the entire thread is extinguished and forgotten about.

VERDICT: It may be daft in places (a crane alignment scene in particular stands out), but which Marvel films aren't? Webb does a better job with teeny romance than masked vigilante, but The Amazing Spider-Man tweaks what we saw from Raimi and Maguire ten years previously, serving as an alternative, entertaining, yet altogether not-so-different spectacle.

N.B. The cameo from creator Stan Lee is probably his best yet. Borderline genius.