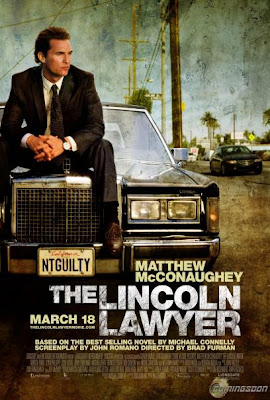 It's fair to say that Matthew McConaughey hasn't always made the best of career choices. Since beginning promisingly with a role in Dazed and Confused almost 20 years ago, the film appearances that followed sank him into a type cast of mediocrity. Rather than striving for anything more substantial, to fulfill the promise he had shown, he appeared content to complacently drift along which, by the way, was a type cast he often portrays; the 'easy going underachiever without-a-care-in-the-world'. Failing to appear in anything of notable quality means that when he does star in a film that's half decent, it's somewhat of a surprise to see him shine with his dormant acting ability.

The Lincoln Lawyer is just that film. In one of his better roles to date (which isn't difficult), the character of hot shot lawyer Mick Haller works for him because he works for the role. The story follows Mick as he shadily conducts his business from the back of his chauffeur driven Lincoln, which inevitably leads him to associate with typically questionable sorts.


Life at this point is easy for Mick. Success and wealth in his profession, convenient hook-ups with tasty ex Maggie (Marissa Tomei), coupled with his womanising lifestyle makes him believe in his own hype, until Louis (Ryan Phillippe) is introduced as his latest client. Playboy Louis is accused of assault and attempted murder and, after strongly denying the claims, insists the woman pressing charges is merely trying to squeeze him. As Mick begins to look into the case and delves deeper, the more inconsistent Louis's story appears, which begins to bare striking similarity to one of his past cases.
McConaughey plays the part of a slick, smooth talking defence lawyer well, as it's the archetype he can recreate with ease. It's a role he's built for and excels as the smarmy city slicker who, after a couple of plot twists en route, is reduced to a nervous insomniac as we witness him morph into a paranoid, dishevelled and irrational person when put under the spot light himself. 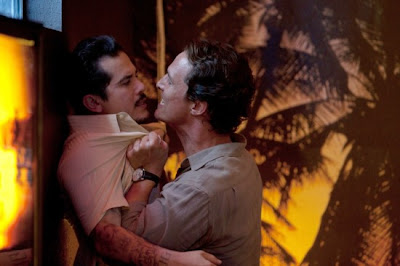 The plot, based on the novel by Michael Connelly, is a clever and well balanced story, with just the right amount of twists and pacing to assert it as one of the most gripping thrillers of the year. Tomei does a worthy job as the emotionally involved ex-partner and shows she can handle a more meaty role after having mostly lightweight parts in recent years. Phillippe also masters the part of the brash and overly assured accused. Phillippe convinces as both the innocent victim as well as the sinister deceiver, displaying a hint of intensity in his performance. Aided by the good chemistry between himself and McConaughey as the story cranks up the tension, the acting adheres a sense of believability to the film. It isn't, however, likely to wow the Oscars panel, but all parties play their roles with a sense of swagger and conviction. Plot intricacies and some dialogue is, admittedly, 'law talk' but the bare essentials of what's occurring still renders it accessible for those unfamiliar with the judiciary spiel. 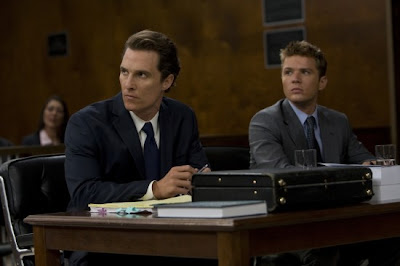 Acting aside, the most pleasing aspect of The Lincoln Lawyer is how the genre morphs from uber tense thriller into courtroom drama for the remaining 45 minutes or so. The latter setting can be something of a turn off to some as, if not handled correctly, the story can get lost down a cul-de-sac of monotony. Thankfully, the pace and momentum of the first hour spills into the climactic days of Phillippe's trial as he twists and manipulates Mick whilst cleverly remaining on the right side of the law. Never does it feel laboured, whilst the threat is both psychological as well as physical, it's down to the quick thinking, king of legally-screwing-people-over-in-courts Mick to ironically find one of his many loop holes used to defend his clients. The element of danger is only exacerbated when Maggie's life, as well as his own, is threatened, which adds urgency to the climax.


In conclusion a delightfully gripping and intriguing thriller with a notable McConaughey in the lead role. Coupled with a tight script and ample support, The Lincoln Lawyer shows that he can act, he can lead, and he can push himself to hold his weight in more demanding roles which will perhaps help him to regain the credibility his career, for most part, has been lacking.
★★★★
Sources : Internet Movie Database
Images : Google Images

A Summer of Sci-Fi

It's no secret that 2011 is going to be a massive year for summer blockbusters with such films as Captain America, The Green Lantern, Harry Potter and the Deathly Hallows Part 2 to name but three, as box office revenue prepares to smash last year into oblivion (only by a couple of £billion, mind).

I've picked out a few potential hits and, along with recently previewed Super 8, it looks like a busy 2011 for science fiction and indeed the industry as a whole, having already been gifted the brilliant Source Code earlier this month.

Jon Favreau's Cowboys & Aliens is already generating a lot of positive response which is only strengthened by the latest strong, entertaining trailer which sets up quite a spectacle indeed. Daniel Craig, Harrison Ford and Olivia Widle star in this sci fi-western-action adventure genre mash up, which in all honesty looks pretty awesome.

Rise of the Planet of the Apes - August (TBC)

The new trailer for Rise of the Planet of the Apes also looks intriguing to say the least. Sceptical as I am about the title let alone the film, the prequel (starring James Franco & Andy Serkis) explains the origins of how the well known premise came to be. The trailer doesn't look half bad and could turn out to be not as awful as first anticipated.

There's also the third instalment of Michael Bays Transformers franchise, which according to reports, doesn't seem like it will be quite the train wreck Revenge of the Fallen turned out to be. Oh, and did I mention Rosie Huntington-Whiteley has now replaced the abysmal Megan Fox? That might turn out to be one reason to tune in...

I'll keep this brief so you can experience for yourself the wonder of the latest trailer for J J Abrams Super 8 released on 19th August this year. Set in 1979, the story follows a group of youngsters as they attempt to shoot their first film on their Super 8 camera, when as you can see from the trailer, they witness a devastating train crash and its top secret 'contents' escaping into the night...

Details remain scarce on the juicy specifics, but it's already been likened to an E.T-style adventure (with Speilberg as producer) due to its nostalgic and somewhat familiar territory, but with a nice dose of fear for good measure.

Super 8 looks promising and, amongst the inevitably over rated army of Summer blockbusters to be released over the coming months, seems like one of the most interesting new films out there. Have a watch and see what you think...