A lot of you may not be familiar with the name Gareth Edwards, let alone his new, and possibly career defining film, Monsters. I have read a lot of comparison to District 9, notably in Empire Magazine whom hail the first writing and directing efforts of Edwards as "an amazing achievement".

However, having viewed the trailer but once, I will admit it does not look anything extraordinary (unlike that of D9). Do not be put off. Do not dismiss it. Because, like D9, you might just be in for the treat of your life.

The concept of other worldly creatures inhabiting and settling on Earth (as long as it's done properly) intrigues and fascinates me, as does the highly praised use of special effects visualising the said titled 'monsters' that allegedly pose a threat to humanity. The tag line 'After six years, they're no longer aliens. They're residents' sums up the premise which fills me with similar anticipation as D9.

Suffice to say I shall be seeing it (this week if I'm lucky) to judge for myself if I have found my new District 9. I will report back as and when. 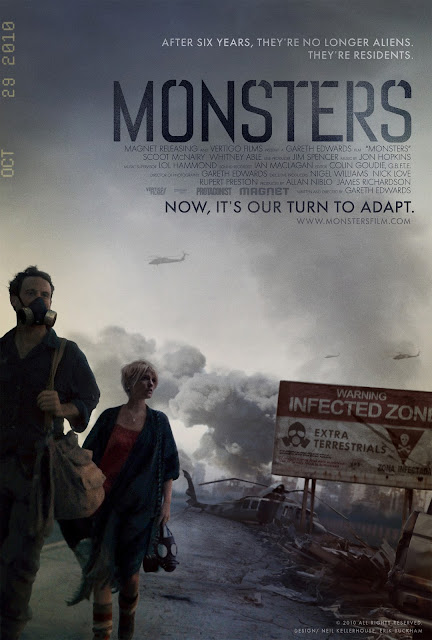